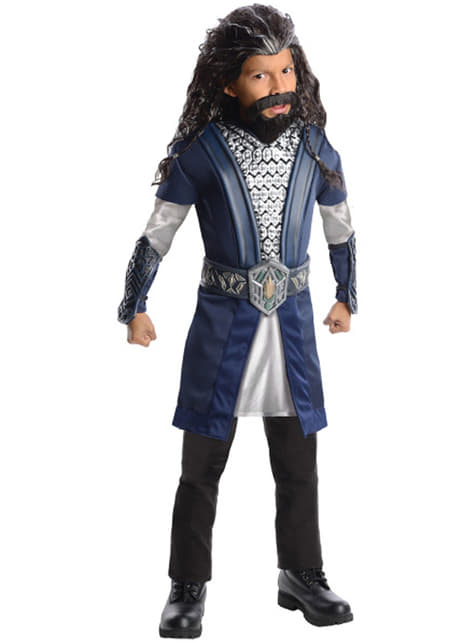 Become the king under the mountain with this Thorin Oakenshield The Hobbit An Unexpected Journey deluxe costume for a boy.

The Hobbit: An Unexpected Journey is the first part of a trilogy of films based on the book by the British writer J. R. R Tolkien and directed by Peter Jackson, whose premiere was on December 13, 2012. This film stands as a prequel to "The Lord of the Rings" and begins on the 111th birthday of Bilbo Baggins who decides to tell his nephew Frodo the facts that occurred on an unexpected journey which started 70 years ago. Along with the dwarves of Erebor and the wizard Gandalf, they undertake a journey through the world of elves, troll forests, dungeons of the orcs and the hiding place of the dragon Smaug to finally find the one ring that many battles are waged in Middle-Earth for.

This authentic Thorin Oakenshield costume includes a blue and white tunic, combined with moulded pieces in the same colours for the chest, in the form of armour, and arms, which protect and complement the outfit making it more similar to the original costume. It also includes a belt in blue, with a large buckle and details in silver and ends in a black trousers.

Upload your photos to Instagram with the hashtag #funidelia followed by #funidelia12375.